Eventually, after drafting so many articles which I never had time to finish and therefore never posted, I am delighted to share news with you about my next design for...

Funny, dark, gripping and intelligent, this powerful play by acclaimed playwright and screenwriter Lucinda Coxon, poignantly defines a generation.
Balancing the cocktail of 21st century life and teasing relationships is as impossible as herding cats for Michael, Justine and Saddo. Justine has an infuriating new boss. Michael works from home, talking to strangers. Saddo is one of those strangers…All three are living a comic fiction in an attempt to avoid the facts. Teetering on the edge, all three are heading inexorably towards Christmas.


Lucinda Coxon is one of the most outstanding playwrights to have emerged in the last ten years. Her hit play for the National Theatre, Happy Now? was described by The Independent as “Wonderfully funny and painfully accurate…hits nail after nail on the head.”, whilst the Daily Telegraph called it“The best new play to have arrived on the British stage for a year.” Coxon’s film The Danish Girl, starring Nicole Kidman, and her BBC adaptation of The Crimson Petal and the White are currently being filmed; she is also writing a new play commissioned by the National Theatre.
Director Anthony Banks is Associate Director of the National Theatre’s Discover programme. His recent directing credits include Mark Ravenhill’s The Experiment (Soho Theatre), Prince of Denmarkby Michael Lesslie and The Eternal Not by Lucinda Coxon (both National Theatre).

I will post very soon some drawings of the design.
Rehearsals start next Monday already. How exciting!


More information can be found on Bath Theatre Royal's website at www.theatreroyal.org.uk/ustinov

Posted by Garance Marneur at 05:59 No comments: 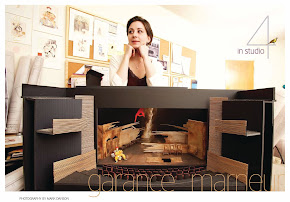